Series Title: The Color of Fear

Lyndi Alexander always dreamed of faraway worlds and interesting alien contacts. She lives as a post-modern hippie in Asheville, North Carolina, a single mother of her last child of seven, a daughter on the autism spectrum, finding that every day feels a lot like the first contact with a new species.

Bio-terrorists release a plague in the United States that spreads to kill most of the world’s Caucasian population. As the deadly virus mutates, Tzu Shin, a renowned medical doctor and biologist, defects from China to help develop a cure. His only daughter, Lin Kwan, is left behind in Hong Kong with her aunt.

Then Kwan’s father summons her from across the sea to bring him Chinese medicinal herbs he needs to develop a cure. Lonely and missing her parents, she accepts the challenge, traveling with her sensei Li Zhong to the New World.

But a Chinese assassin is on her trail, determined to kill her and Li Zhong, and when Kwan discovers her father has disappeared, she sets out on a journey to find him and deliver her precious cargo, a quest that she may not survive.

You're new to TattleTales, can you tell us about yourself?

I grew up in Euclid, on the east side of Cleveland. My dad was in the Air Force when I was born, so I came into the world at Sheppard AFB, Texas. I have also lived in very south Florida for several years, in the mountains of Montana, and just south of Lake Erie in Pennsylvania. Now I’ve retired to Asheville, in the beautiful Blue Ridge. I live with my youngest daughter, who’s on the spectrum, age 21. Another daughter also lives in town, which makes me grateful. My other five children are spread across the country—and I have 12 grandchildren. Oh, also seven cats. They tend to be more affectionate than the human children.

Wow! You've really moved around! What’s your favorite part of the writing life?

When I’m on a roll—sometimes things just come together and flow.

What inspired the title of your book?

This saying: When the wind of change blows, some build walls; others build windmills.

Absolutely! Great saying! What was the most unusual or interesting part of the story to research?

I was really fascinated when I contacted a librarian at the huge San Francisco library to find out what sort of resources they would have available that might be helpful after an apocalyptic event—Kwan has to try to track her father down at a government installation. I got a lovely letter from the librarian, giving me everything I needed.

Also, in researching botulinin toxins and terrorists, I was just grateful Homeland Security didn’t show up at my door!

LOL! I have a story I'm working on where I worry about the same thing! What are a couple of your all-time favorite books in any genre?

I’m a Stephen King fan, particularly the older books. The Stand will always be a fave. I also love the dragonlore books of Anne McCaffrey. She and I both write about underdogs who fight to succeed.

What is the most difficult thing about writing a book?

Getting through the middle. In the beginning, we’re always jazzed to be working on a new piece. As we come down to the end, we’re braiding the pieces in place to get everyone where we want them to be.  But often in the middle, the enthusiasm is dampened and it seems to go on FoRRR-EVVV-ER.

Absolutely, I agree! What do you do for fun, besides writing?

Gardening, quilting, ethnic cooking.  I used to travel quite a bit, but I’m not in the kind of condition I can do that anymore.

Is there a message in your novel that you want readers to grasp?

That you don’t have to be Superman to be a hero—what it takes is a strong heart and the will to see right done in your world.  In this series, the evil of radical white supremacy becomes a threat to those who survive the apocalypse—and it must be stopped just as much there as it should be here and now.

The old adage of not being Superman but being a Super Man or Woman. Great message. If writing is your first passion, what is your second?

I honestly think it’s motherhood this time around. I keep kidding my girls that my next life will be the Sex and The City kind of life, all about makeup and shoes and girly stuff. Between my bio kids, my adopted kids, all the kids who attached to me over the years as a “second mom” and now fostering kitties, I have definitely spent this life in Momma mode.  Last fall was the first time I had no kids in school for 35 years.  35 years of getting kids off, homework, all that---but I am so grateful that I don’t have kids in school in 2020. I feel for all those mommas and dads having to make the tough decisions.

That's wonderful! What’s next for you, Lyndi?

I’m working on a science fiction romance with a gender-shifting alien as the third person in a ménage. It’s turning out quite interesting. *wink*

Finally, what would you most like to say to your readers?

I appreciate your reading my books! That’s why I made them. 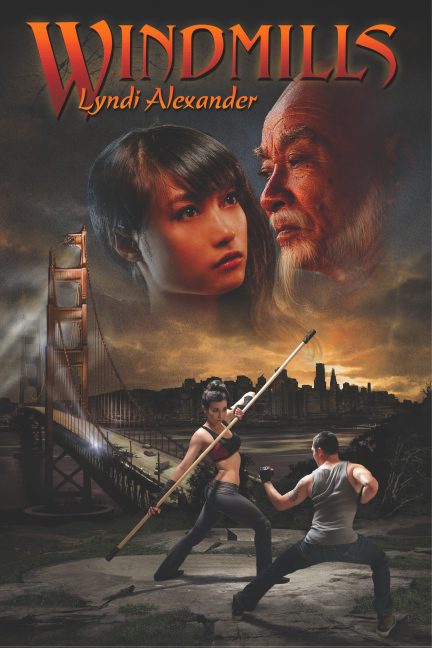 Kwan Lin looked over her shoulder at the darkened San Francisco street, sure she’d heard the sound of an empty can skimming the ground. She swallowed nervously, pulled the ragged, oversized black jacket closer around her delicate frame, and hurried on toward the drug store.

This Pacific Heights neighborhood had once been exclusive and well-protected. Now, eight months after the terrorist attack they called the Second Holocaust, electricity was at a premium. No more than every fourth streetlight was lit along Laguna Street, and the space between filled with dark shadows. Four weeks earlier, angry young men wearing the blue headbands of the Seajay gang had killed Kwan’s sensei Donjo within a block of this place.

Another noise behind her sent a chill down her spine. There were several sets of footsteps now, she was sure of it.

Alarm twisted Kwan’s stomach. She’d taken all the precautions Donjo required, wrapping her long silky black hair up under her hat and wearing a thick jacket to hide the fact she was a slight-bodied sixteen-year-old, instead of another black-garbed street punk. It was January, and already dark by seven o’clock. She’d intended only to get some medicine from her contact at the pharmacy, fifteen minutes at most. She felt anxiously in her pocket for her switchblade. A deep breath centered her, a well-trained ear determining the relative location of her potential attackers as they approached her from behind.

The first made his move, a dark shape leaving a shadowy alley some ten feet behind her. Her peripheral vision caught the direction of his arm thrust toward her, and she turned swiftly with a roundhouse kick and snapped a bone in his lower arm. He wailed and stepped back, as two more men wearing the trademark blue headbands moved in. Shifting her weight from one foot to the other in readiness, Kwan watched them, trying to guess which would come at her first.

It was both of them.

The bold black handwriting on the box looked familiar. His address was hardly legible through water spots.

He shared half a smile. “I had no idea plague was on the Post Office list of disasters—rain, snow, gloom of night?”

The man straightened his shoulders and stuck out his hand. “Cyrus Dale, postal carrier, at your service.” He shook San’s hand warmly. “There’s only three real mailmen left in the county. I mean, from Before. They tried to get the word out that people could come pick up their mail, but everything came in by the truckload, one from north and one from south every couple months. No way to keep it from piling up.”

San nodded, the announcement a vague memory. He’d figured no one outside his little neighborhood knew him and saw no need to collect any junk mail.

The young man grinned. “They finally hired a bunch of us to help get it cleared out. We’ve been dividing up the neighborhoods and suburbs. We’ve tried to deliver it all, but most mail…” He shrugged. “No one to receive it. But they’re paying us in gov-scrip to try.”

“Works out for everyone that way.” San eyed the box. He knew no one in St. Louis. What could be in the package? The writing…the writing was the key…

He squinted at the stained label and deciphered a faded note in black marker.

It’s for real, Sandman. Be cool.

San’s lips twitched into a smile. So, his childhood friend wasn’t just another statistic of the Second Holocaust; he’d made it somewhere. St. Louis.

His curiosity drove him to cut the conversation short, holding the box close.

“You’ll be safe enough here until dark,” he warned Cyrus Dale. “thanks for the personal attention, for this.”

“It’s my job, man. I love to see the smiles on people’s faces. You have a good one, okay?”

The makeshift mailman continued on his route, and San retreated to his apartment to see what Eddie had sent. Upstairs, he crossed the room to the table and set down the package.

Mail. After all this time—mail.

The reminder of more civilized times made his eyes sting with tears. Fighting to dismiss his rising emotion, San peeped in the cold-box and pulled out an open can of processed meat. He grabbed a paring knife and sat at the table in front of the box, slicing a piece of the meat and stabbing it with the blade to eat it. His mother would have heartily disapproved of his rough ways. He could almost hear her admonishing him that even vigilantes should have table manners… Almost. The memory of the sound of her voice was fading, like so much from Before.

Where can we purchase, WINDMILLS?

If a movie was made about your life, who would you want to play you? Kathy Bates

What song best sums you up? You Can’t Always Get What You Want….by the Rolling Stones

Oxford comma, yes or no?  No

What does your desk look like? Everything I’ve had to look at in the past week…. Plus a cat.

What is your writing vice or must-haves? Coffee does it.

Plotter or pantser? Half and half. I kind of wing the first half of a novel, then plot it down so it goes where I want in the second half.

What is your favorite thing to learn about in your free time? New kinds of foods

You have a time travel machine. Where and when? Wow, that’s a tough one.  I think it would be awesome to see the living dinosaurs—as long as I was in a protective container and wouldn’t turn into dinner!!

Are you earth, wind, fire, or water? Aries with Aries rising? Definitely fire