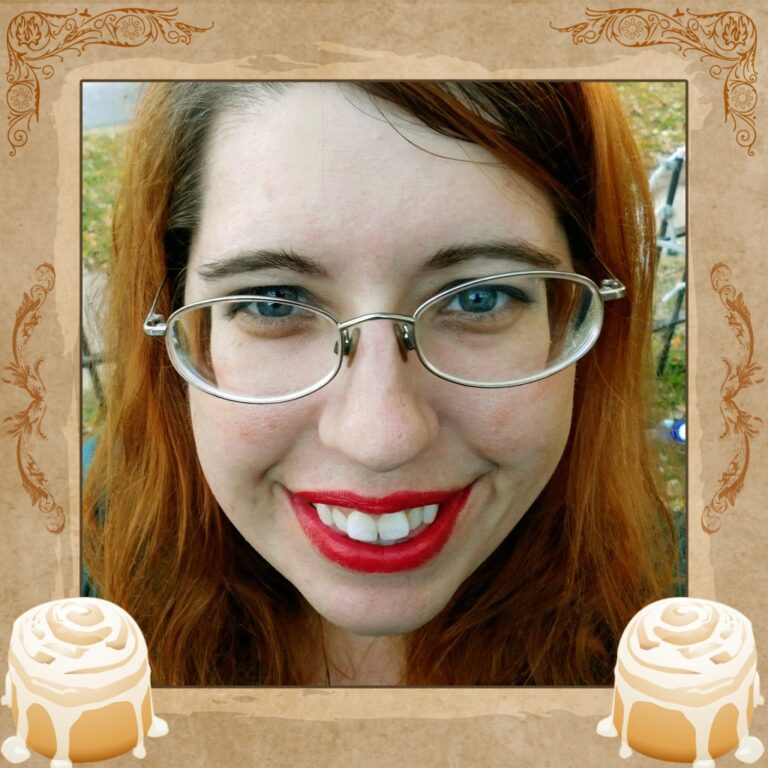 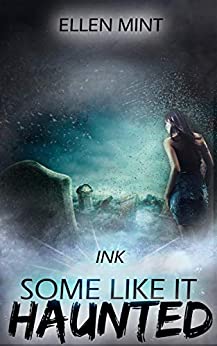 All About Ellen Mint

Ellen Mint adores the adorkable heroes who charm with their shy smiles and heroines that pack a punch. She has a needy black lab named after Granny Weatherwax from Discworld. Sadly, her dog is more of a Magrat.

When she’s not writing imposing incubi or saucy aliens, she does silly things like make a tiny library full of her books. Her background is in genetics and she married a food scientist so the two of them nerd out over things like gut bacteria. She also loves gaming, particularly some of the bigger RPG titles. If you want to get her talking for hours, just bring up Dragon Age.

What do you love that most people don’t like and wouldn't understand why you do?

Sour! I am a sour fiend and have been forever. Warheads were nothing. Sour patch kids are eaten by the handful. I used to fish lemons out of glasses of tea and eat them when I was a kid. I’d ofter rather have a sour skittle than chocolate.

Yep, that's weird! And weird is BEAUTIFUL! What are the words you live by?

Nice is different than good.

It certainly is! What was the hardest or most unusual part of Ink's story to research?

Layla is a nursing student which means I get to do TONS of research into a nursing curriculum. I’ve even started taking practice tests and have passed a couple.

I was a nursing student, once upon a time. I have to say that's some serious dedication to research! What blows your skirt up or knocks your socks off, besides family and friends?

This is gonna surprise people who don’t know me, but it’s video games. Especially Dragon Age, and we just got the first sign of life for DA4 in over a year. Nerd squeal! I’m surprised more romance readers and writers don’t get into games. Beyond the stabbing people and monsters, if you find the right one there’s hot men and women you can romance. Or betray. Whatever you want to do.

Big giggle! How fun! I can't wait to hear the answer to this next question... How do you choose the names and physical characteristics of your characters? Do you base them on real people?

Wheel of Randomness, turn turn turn, give me a name that I can learn. Okay, it does depend. Sometimes I set off knowing I want a certain ethnicity or background and that will influence the name.

Or I need to get the feel of the name perfect for the character I want. But otherwise, random name generator it is. For the characteristics, it’s usually a combination of their personality and then as I write them they’ll reveal something.

I almost never base them on people I know.

How would someone benefit from signing up for your newsletter?

Not only does my newsletter provide info on sales and new releases, I write articles about things that have inspired my books, aspects of my life, humorous anecdotes, and even an occasional short story!

Very cool! I love picking out that perfect name! Switching gears... There are a lot of newsletters out there and not a lot of time during the day. How would someone benefit from signing up for your newsletter?

Hey kid, want a story? The first one’s free. And probably one for Christmas too. I always ask my readers to pick a couple from my books for a free Birthday story. And I have something brewing in my mind for Halloween that is very interactive. My newsletters are cram-packed with excerpts, giveaways, new books, and free short stories.

Right on... Okay, now it's time for Sophie’s choice… Answer honestly, which of your books is your favorite? (You can’t say all of them)!

I’ll go with Pride & Pancakes because it was the first one I got a publisher deal with.

Fantastic interview Ellen. It was a pleasure to get to know you. To end the interview is there anything else you'd like to say to your readers?

Keep your stick on the ice.

All Layla wanted was to spend her Halloween birthday alone. She never expected a nearly naked man in a red thong to appear out of nowhere in her living room. He calls himself Ink and insists he’s an incubus bound to her. Not about to fall for that, she plans to toss him out on his shiny butt when she remembers her friends kept hinting at a late birthday present. Layla fears they got her one hot session with a man built for sex. And it’s not nice to return a gift without trying it out…

In this steamy prequel to a paranormal reverse harem series, Layla learns that her entire life has been a lie and that sometimes a man who wants to answer her every desire is exactly what he appears to be.

In the process of righting my eyes, I caught a flash of light breaking from the living room. It kept strobing as if a lightning storm had crashed on my futon. If I wasn’t partially hungover and drunk at the same time, I’d like to think I’d have done the smart thing. Called the cops, called the building manager, grabbed a weapon. Not walked out into the weird lights and sounds armed only with my exhausted hand on my hip.

As I stepped into the hallway, noting that my front door was still closed, a shadow crawled across the wall. It looked like a man rising to his feet when a pair of giant bird wings erupted from behind his back. They stretched wide, every shadowy feather straining as if this intruder were about to fly.

Did I turn around, grab my phone and wait for the police to sort this out?

Of course not. I ran straight into my living room and my jaw hit the floor.

It wasn’t because a giant bird flew into my apartment and flapped about in pain. Or that one of my old angel costumes from a past Halloween had come to life and started dancing around. No, this was even weirder.

A gorgeous man with sun-kissed skin stood on my yoga mat. His hair was lush and reached his collarbones. His very exposed and cut collarbones. Which drew my eye lower down the rest of his body.

I could have offered to check him for moles for how naked he was. His chest glistened the only way hairless skin could, which he had puffed out to display his impressive pecs. A single line of dark hair revived itself under his labyrinth of abs. I tried to count them but lost track as I followed the treasure trail down to a pair of red satin briefs that barely covered his shame.

And it wasn’t just because the fabric was tiny enough it revealed nearly his full bush to the world. No, whatever pipe he was swinging bulged so tight below his underwear it looked like it was vacuum packed for easy transport.

What if that wasn’t the full show he had?

What the hell is wrong with me?

I lashed out with my hand and snatched up the first thing I could…which happened to be a pillar candle. Waving it about as if it were a club, I shouted, “Who the fuck are you?!”

The man laughed, his voice that deep ‘roll through every nerve in my body’ baritone. “Highly accurate,” he said, raising and lowering his sharp eyebrows while a smile perched on his lips.

I shook the candle around, prepared to attack him if he didn’t give me an answer. The stranger eyed it up, then said, “I am your incubus.”

Hands cinched to my waist, Ink lifted me into the air. I couldn’t think, my brain screaming in impotent rage at the stranger physically carrying me around my damn apartment. My back struck the wall, shaking an old poster of the Eiffel tower. Those strong palms capable of hefting me by my hips slapped to the side of my face.

He drifted closer, hips first. His tiny pair of satin briefs caressed the pants of my roomy scrubs. Even with all that cheap polyester between us, I could feel his cock straining from its prison.

Amber fire flickered in his deep-set eyes, which peered through me as if he could read my soul. I dug my toes in to keep from quivering in both fear and exhilaration. My brain wanted me out of there, but my body begged to grab his ass and haul my birthday gift to me.

Ink smiled and raised a single thumb. Was he trying to tell me I was doing a fantastic job? Before I could ask what that meant, he brushed it against my Cupid’s bow and down. My lips parted, a pant building in my lungs and my tongue tried to slip out like it had intentions of wrapping around his thumb. Or other things.

But his thumb continued lower, the trace of his fingerprint caressing the hollow of my throat and down my sternum. What was he going to do? What did he want?

I glanced up at him, his lips glistening from a powerful breath, and one thought bounced through my brain. Kiss me.

A fist clamped around my hair, yanking the curls down until I was forced to stare up at him. The pull stung but there was no pain, only a tingle ringing through me.

Chuckling in his deep baritone, Ink circled his other hand around my jaw and leaned down. With his forehead pressing to mine, he whispered, “You’re going to be fun.”

Name three things you see when you look right:

My giant water cup plastered with Spider-Man Far From Home
Hardening nail polish (I like to paint my nails while I edit)
My dog, mad that I’m not giving her treats

What’s the best swag item you’ve ever seen? A small puzzle of a book cover

Who do you think is the most irritating celebrity? Piers Morgan

What is your most attractive feature? My cool dry wit. It lets me be an action star.

Cook, baker, or next question? Cook. My husband does the baking.

If a movie was made about your life, who would you want to play you? Katherine Hepburn (Hey it’ll never happen, so I might as well go for broke)

What song best sums you up? Smile

If we were here when the earth began would you be a hunter or a gatherer? Hunter

What is your favorite thing to learn about in your free time? I’ve been on a true crime kick lately.

You have a time travel machine. Where and when? To the future! If worse comes to worst, I can go full Morlock.

Are you earth, wind, fire, or water? Water