USA Today Best Selling Author. Veronica Scott grew up in a house with a library as its heart. Dad loved science fiction, Mom loved ancient history and Veronica thought there needed to be more romance in everything. When she ran out of books to read, she started writing her own stories.
Seven time winner of the SFR Galaxy Award, as well as a National Excellence in Romance Fiction Award, Veronica is also the proud recipient of a NASA Exceptional Service Medal relating to her former day job, not her romances!

She read the part of Star Trek Crew Member in the official audiobook production of Harlan Ellison’s “The City On the Edge of Forever.”

Badari Alpha Jamokan and his pack are growing discontented in the sanctuary valley, tired of coming in second place to the pushy new South Seas pack when it comes to assignments and everything else. On top of the discord within his pack, Jamokan is distracted by the search for the right woman to be a proper Alpha’s mate to partner with him in combat and in everyday life. Even the Badari goddess is warning him in visions that he and his pack are on the wrong path for a happy future. In desperation, he receives permission to take his entire pack north to the mountains for a two week hunting expedition, where he hopes to use the time and rugged surroundings to settle the soldiers down and restore order and discipline.
And figure out his own future.

When his men unexpectedly locate a hidden Khagrish lab, he goes to investigate and see if there are humans to be rescued. Little does he suspect he’ll be called upon to break one of the highest commandments of the Badari packs and bring a new disaster to those who look to him for leadership.

Before she became a Khagrish prisoner, Rosemari Parcher was a hydroponics technician on a gritty colony world, who unexpectedly won a planetwide contest. Tapped to receive her heart’s desire and move to a totally different life in the luxurious Inner Sectors, her life had become a happy dream. Kidnapped in space by enemy aliens and given to the Khagrish, she and other humans are the unwilling subjects of a bizarre medical experiment where a quick death seems to be her only hope.

Rescued by Jamokan and his pack, she finds herself deeply attracted to the Alpha but the devious Khagrish aren’t through with Rosemari or the experiment.

What is the most inspirational thing you’ve ever done in your life?

Working at NASA/JPL and playing a very tiny role in the robotic exploration of space. Being part of the effort to increase humanity’s knowledge of the Universe around us was an incredible opportunity, especially for a business major like me.

That is so cool! I didn't know you worked for Nasa! What do you do for fun, besides writing?

I have very lively toddler grandchildren so when we aren’t in the middle of a pandemic, I spend a lot of time with them. Currently it’s all video chat and socially distanced.

I know, it's so hard to see your family, but at least you can do it through video calls. What book have you read that you wish you had written?

Dragonflight: Dragonriders of Pern by Anne McCaffrey, Radiance by Grace Draven or Shield of Winter by Nalini Singh.

Who is your biggest cheerleader on earth or angel in heaven?

My late husband. We met in high school and married at 19 and he was always a huge supporter of my writing. He very much encouraged me to keep writing, even as we put ourselves through college after he left active duty in the USMC, went into the work force, had children, etc. He shared the dream of my becoming a published author someday. My two daughters are also huge supporters of the books.

Have you written any other books that are not published?

No, if I’m going to write the book, I’m going to release the book. That’s part of being self-published that I very much appreciate.

You definitely have more control as a self-published author. What do you like best about your hero or heroine?

Jamokan is committed to doing his best for the soldiers he leads. As Alpha of his pack, he feels responsible for their well-being more than his own. He’s also dedicated to helping the younger generations of Badari deal with the challenges and opportunities ahead.

Nalini Singh. I’ve been fortunate enough to meet her several times briefly but it would be lovely to just sit and talk at length. I’d love to pick her brain for tips about writing long and successful series!

What’s next for you?

I’m currently working on a second book in my new COLONY scifi romance series. Then I expect to write another Badari Warriors book.

…. And now, the last question. What would you most like to say to your readers?

Thank you so much for believing in my characters and the world in which they exist! And asking me for more books is the highest compliment an author can receive. And when someone mentions they’ve reread one of my books, I’m truly moved and delighted. 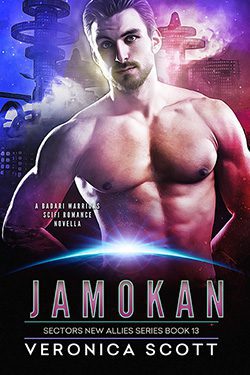 It was one of the best nights of his life. Even better than their first night as free men outside the lab. Able to run tonight and savor the sights and smells of the ancient forest, no cares or worries, Jamokan allowed the energy from the three moons to course through his body and push him to new levels of exhilaration. He was drunk on moonlight, he freely admitted and threw back his head to howl a challenge to the entire damn planet. He plunged into an icy lake he came across and then emerged dripping wet to run again and give voice to his wild emotions. The predator entwined in his complicated DNA was more than halfway in charge and tonight was probably the closest he’d ever come to knowing how it felt to be the beast.

At times Jamokan believed he saw a shadow pacing with him, the reflection of the great canine from which some of his attributes had come, courtesy of the Khagrish perverted ‘science’. He relished being across the line tonight, immersed in his predator self. He’d welcome the dawn and a return to manhood because the Badari prided themselves on not being the mere animals their creators named them, but for now the sheer power he commanded was too intoxicating to relinquish.

Jamokan rushed through the hall and out the open door, heading for the tree line. All his instincts were telling him the woman needed to be in the fresh air, away from the enemy’s medlab. If she was going to die, it would be as a free woman, with him holding her to give what comfort he could. But she’s not going to die because I will not let her go. She was so fragile in his arms and his heart turned over as the humans would say, knowing what a precious burden he was carrying. All his hopes and the tentative beginnings of a different future—all bound up in this woman’s survival and his unshakable belief she was his mate-to-be.

Jamokan had rescued humans from the Khagrish before, some as fragile as this lady, but none had meant so much to him personally. The vulnerable feelings were new and unsettling to a soldier such as himself but a glance at her face was all it took to push him to new efforts to get her to safety.

Dogs or Cats? Cats
Number of books you’ve written? I have 43 published and am in the middle of writing the next one.
Name three things you see when you look right.

What’s the best swag item you’ve ever seen? The one I actually used most was a lip balm.
Cook, baker or next question? Baker. Major sweet tooth!
Place you’d like to visit: Ireland
If a movie was made about your life, who would you want to play you? Either a new, complete unknown actress who deserves a break or Sigourney Weaver at the “Aliens” stage of her career.
What song best sums you up? Beach Boys “Fun Fun Fun” which I want played at my funeral
Describe yourself in three words:

If we were here when earth began would you be a hunter or a gatherer? Gatherer
Coffee or tea? Tea in a pretty china cup
Spring, Summer, Fall Winter? Fall
Mac or PC? PC (laptop actually)
What is your favorite thing to learn about in your free time? Ancient Egypt
You have a time travel machine. Where and when? Either the time of King Tut or the deck of the Titanic
Are you earth, wind, fire or water? Wind

What a fun interview! Thank you so much Veronica for stopping by on my blog!

Where can we purchase Jamokan: A Badari Warriors SciFi Romance